...that it is awesome the CTA will haul my ass across town for two bucks. Cheaper than dealing with a car and I get a lot of reading and work done. But I would gladly pay them $2.50 if they ran on time, kept the trains and buses safe and clean, and kept their station and bus staff happier than their executives. $3 if they can also figure out a way to have pretty ladies take the empty seat next to me instead of the usual big burly men who smell like Old Spice and farts.

...that my heart belongs to failing art forms. Oh, sure, I'll poop out that short wacky video, if you like, and show you the Emmy I accidentally broke by dropping it in a box of kitty litter, and I would drop everything if anyone in NY or LA said "Come. We have a well-paying job for you." but my heart belongs to Old Time Radio and theater. I feel like I arrived fifty years late to a party.

...that I am really enjoying watching the Republican Party eat itself. McCain is a maverick. And that's admirable, but also the problem. Mavericks aren't team players or team leaders. Mavericks buck the system, not become the system.

...I don't get litter. What fires off in someone's brain that says, "Okay, I'm done with my thirty-two ounces of caramel-colored artificially-flavored corn syrup bubbly water. I guess the thing to do now is open my hand and let the cup fall to the ground or floor of the bus."? I'm sure there's some deeper psychological anger/entitlement thing going on with people where litter is their way to say "Fuck you!" to the world. If you want respect, you have to be respectful. Treat the world like a trash bin and you'll be treated like a trash bin. Litterally.

"Daniel Cowart and Paul Schlesselman were arrested for plotting a crime spree that was to end with them wearing white tuxedoes and top hats while doing what?"

10% said "voting for McCain"
- Thank God the police stopped them!

No one said "bitch-slapping Biden" or "hunting Palin"

90% got it right with "shooting at Obama"

According to The Smoking Gun, according to a court affidavit sworn out by a Bureau of Alcohol, Tobacco, Firearms and Explosives agent, Daniel Cowart, 20, and Paul Schlesselman, 18, began discussing the murder plot after meeting online about a month ago. In the ATF affidavit, Cowart and Schlesselman "discussed the killing spree to include targeting a predominately African-American school, going state to state while robbing individuals and continuing to kill people." The pair's "final act of violence" would be an attempt to kill Obama, the Democratic presidential nominee. In separate interviews with investigators, the men said that they planned to speed their vehicle toward Obama while "shooting at him from the windows." Apparently befitting the historic assault, Cowart and Schlesselman "stated they would dress in all white tuxedos and wear top hats during the assassination attempt."

They were almost ready to run with this plan. Here's Cowart's mom putting the finishing touches on their top hats. 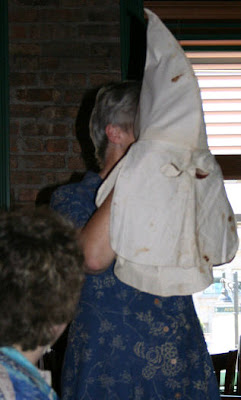 Posted by Joe Janes at 8:46 AM 4 comments: Links to this post