...that people who are angry and can't face the truth of their rage - their own failings, usually - are easy to rally around a common enemy. The bulk of right wing tea partiers are pissed off sheep blind to their own prejudices as they focus their hatred on Obama, the new Hitler, under the flag of protecting the constitution. Where were these guys during the Bush years? Where were these guys last week in Arizona?

...that the natural state of things is clutter and decay. Anything alive will die. Anything clean will be attacked by dust bunnies. Our job on this planet is to be its custodians. And it starts with my apartment. Can I get the EPA to clean my bathroom?

...that the cool thing about the Internet is that it allows us to discover music, films and TV shows that just wouldn't come up on the regular channels. And I can fill my Pushing Daisies void with a show I completely missed the first time around, Dead Like Me.

...that I love plays that revel in lively ensemble storytelling. Go see Strawdog's production of The Good Soul of Szechuan.

...that one month away from the start of 365 Sketches in June I am 80% excited and 20% freaking out about the scope of the project. The directors and casts are amazing and I am blown away by their ingenuity. I threw them a lot of creative challenges that even I wasn't sure how they could be done on stage. And they're being done. Time Beaver costume? Handled.
Posted by Joe Janes at 5:34 AM 1 comment: Links to this post

Email ThisBlogThis!Share to TwitterShare to FacebookShare to Pinterest
Labels: "I Believe", "The Good Soul of Szechuan", Dead Like Me 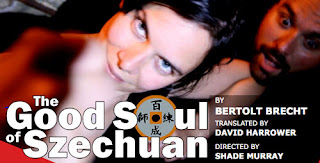 When I first heard that adage, I thought it was funny, but I didn't really understand it. Then I gave a homeless person in my neighborhood five bucks. The next time I ran into them and I didn't have anything to give them, they were pissed. No good deed goes unpunished.

On a bigger scale, Obama attempted to provide healthcare for all because people are dying and/or going bankrupt. His reward has been death threats, slander and a compromised bill.

"The Good Soul of Szechuan" is a timely tale and a really good time.

Bertolt Brecht was a German playwright and director. While motivated by the political and social unrest similar to the Dada movement, he wasn't out to destroy art but use it as a tool to convey and explore inequalities. His most famous works are "Three Penny Opera" and "Mother Courage." Stylistically, he championed theater as a collective experiment, often ensemble oriented and generated works. He was less interested in his words being presented respectfully and realistically and more interested in engaging and challenging the audience. It is quite common for his actors to announce their stage directions and character's intentions while performing in his quest to strip the story of representing reality.

Brecht's style is often mis-termed "alienation." It is anything but and that is clearly demonstrated in Strawdog's production. The "alienating" techniques of interrupting action with songs, announcing entrances and exits, addressing the audience, no set, harsh lights, actually gels audience and actors. One feels like we're all in this together.

The story begins with three gods in search of a good person. They are having a tough time. In Szechuan, they find Shen Te, a kind prostitute played robustly by Micheala Petro. Shen Te points out to the gods that it's difficult to be good while poor. They agree and reward her with money. She sets out to make a respectable life by using the money to buy a store to sell tobacco while also giving to the community. This overt action and her reputation for being good natured attracts a parade of mooching relatives, neighborhood beggars and insincere lovers. Faced with the likely collapse of her business and own future, she becomes her own cousin, Shui Ta, who kicks everyone out and doesn't take any shit. So, does this mean one has to be bad to be good?

This ensemble is in top form. Carmine Grisola as the gods' mortal guide in Szechuan is an anchor of good conscience while trying to eek out a living selling water. He plays it well and brings a strong empathetic sense of a good guy working hard just trying to make a living. It has to be tough to have any sense of optimism when selling water during the raining season. John Henry Roberts as the pilot without a plane deftly uses emotions as strings to pull to do whatever he can to become a true pilot again. He also has one of the best rock songs in the evening, "Pigs Will Fly."

Under Shade Murray's direction, the Strawdog ensemble invites you into their warehouse party and show you a good time while making you think and feel. For anyone who has ever done a good deed only to feel ripped off and burned, this may not be the tonic you need, but it does make you feel like you're in good company.

- I loved that the production was a scrappy mix of thrift store props and costumes and improv-style object work. When pantomiming drinking out of a glass, your thumb is NOT the lip of the glass. Everyone I saw drink from an improv glass pressed their lips to their thumb while sipping. Your thumb should be wherever it would be when you hold an actual glass, a good inch or so below the rim.

- I don't care if your playwright is dead, give 'em a bio in the program. Someone in your audience is likely to be new to the writer's work, so give them an opportunity to learn more and give the writer their due. This is the second production in a row I have seen where the playwright was dissed in this manner.
Posted by Joe Janes at 5:24 AM 1 comment: Links to this post

Robot vs. Dinosaur has cast our spring show. We had a great turnout of talent at auditions and, as usual, I wish we had more roles to go around. So many great people in Chicago.

Our new show opens the first Friday of June, the same time "365 Sketches" is rocking at Strawdog. As such, I'm not able to be in the show or do any directing. I just get to pop my head in from time-to-time and do things like furrow my eye brows or nod approvingly. Mostly the latter.

You can check out who got cast HERE.
Posted by Joe Janes at 9:42 AM No comments: Links to this post

There's a new post over at 365 Sketches. You find it by clicking HERE.
Posted by Joe Janes at 7:08 AM No comments: Links to this post

...that procrastination is a form of preparation. Watching instant movies on Netflix helps me get just the right mental outlook to tackle sweeping the floors.

...that if you don't have a vision for what you want, you're flying blind and keeping your fingers crossed that you find a landing strip before you find a mountain side.

...that I'm really tired of how much time and energy the GOP spends on making sure you know how much they disapprove of whatever Obama does, even when it's in line with goals they've had for decades. You lost. He won. You're grown ups. Get over it and do the job your were elected to do.

...that it's probably better to have loved and lost than to have not loved at all, but it doesn't help you figure out where that next hand job is coming from. Did I say "hand job"? I meant "love."
Posted by Joe Janes at 6:57 AM No comments: Links to this post

Audition for Robot vs. Dinosaur

Slots available each hour from 10 a.m. through 3 p.m. The audition will be cold readings from the script with some improv.

DONNY’S SKYBOX, Friday’s at 9 p.m. from June 4-June 25
(Important: You must able to make all performances to audition.)

Looking for a variety of MALES and FEMALES. This will be a large cast show. It will be a fun time and a great opportunity for all levels of experience.

Please bring headshots and resumes (if you have them) to the audition, as well as your availability for rehearsals from now through June 4th.

For more info about RvD check out our blog: www.rvdchicago.blogspot.com
Posted by Joe Janes at 10:27 AM No comments: Links to this post

...that there is no heaven. If you spend this life focused on going to a blissful afterlife, you're missing - or avoiding - living now. And if I'm wrong, then I have a pleasant surprise coming my way. What? You don't get into heaven if you don't believe in it. I find that difficult to buy. Which Bible is that in? That puts me and many decent people in the same category as murderers and pedophiles. Seems a bit harsh for being pragmatic. Maybe there are levels. I get into heaven, just not into the VIP rooms. Instead of a halo and wings, they hand me a bucket and mop.

...that if you spend your time trying to be liked by as many people as possible, then you live your life like it's a big blob of Play-Doh that other people get to shape. Be your own Fun Factory.

...that John McCain will say and do whatever he thinks will make his constituents like him. He now says he never said he was a maverick. My mother suffers from Alzheimers. If he's not pandering, I am concerned.

...that you can keep your iPad and your iPhone. Love my MacBook, but I'm fine with a book and my non-AT&T Blackberry Tour.

...that the best stress reliever is rubbing my cat's belly. Corporations should strongly consider cat belly breaks. People who are allergic to cats are going to hell. It's in the Bible.
Posted by Joe Janes at 8:02 AM 1 comment: Links to this post

We'll be doing all 365 sketches here in Chicago June 3 - 13. If you can't make it and you, your theater company, comedy group, book club, cult, militia, whatever, want to put up a "365" show, you're welcome to. The only stipulation is that it has to fall within June 3rd and June 13th. Contact me at joejanes1065@gmail.com and we can work out the details.

Joe
Posted by Joe Janes at 6:33 AM No comments: Links to this post