...the future is here. We can take a little pill for anything. Unfortunately, that little pill has ten other side effects as bad or worse than what ails you, but don't worry. There's a pill for each one of those, too.

...that 'barista' is just a fancy word for to keep low wage fast food workers from feeling completely like shit while making the soy latte the lady in the fur jacket is just going to have them remake because the foam isn't foamy enough for her.

...homeless people would be less scary if they weren't so grumpy. Remember, homeless dude, that McDonald's drink cup you pulled out of the trash isn't 90% empty, it's 10% full (5% backwash).

...Musicals that simply imitate a film for the stage caters to the morons holding civilization back from evolving intellectually. A good story should be able to stand uniquely on its own as a novel, play, pop-up book, whatever. To simply recreate a film on stage with millions of dollars of copycat eye candy is creatively weak.

(editor's note: Apparently, I screwed up entering the date and time for the poll/quiz to close and ended up only leaving about a one hour window from the time of posting to the time of closing. My bad and my apologies for anyone who didn't get to show off their smarts.)

"Researchers at Florida State University have created a material 10x lighter than paper and stronger than steel. They call it what?"

100% said "adamantium"
- No. As Gene Grillo once told me, adamantium is the strongest substance known to comic book artists.

No one got the correct answer, "buckypaper"

According to The Huffington Post, buckypaper is 10 times lighter but potentially 500 times stronger than steel when sheets of it are stacked and pressed together to form a composite. Unlike conventional composite materials, though, it conducts electricity like copper or silicon and disperses heat like steel or brass. So far, buckypaper can be made at only a fraction of its potential strength, in small quantities and at a high price. The Florida State researchers are developing manufacturing techniques that soon may make it competitive with the best composite materials now available.

The best thing about buckypaper is its potential use on Klingon starships to build tanks to transport whales from the past to the future to communicate with destructive probes from the outer regions of space. 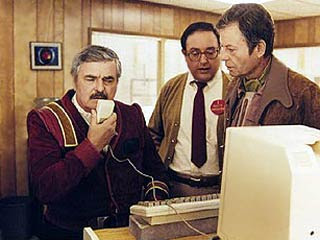 Posted by Joe Janes at 5:42 AM No comments: Links to this post