The Museum of Science and Brainwashing 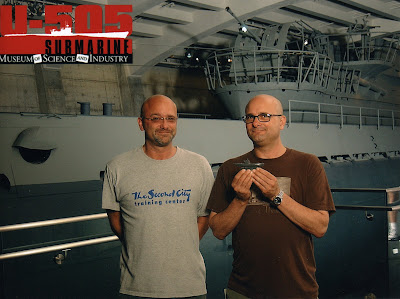 Here's a close-up from a website devoted to the art that is Mold-O-Rama!

Here's a picture of a Mold-O-Rama Machine... 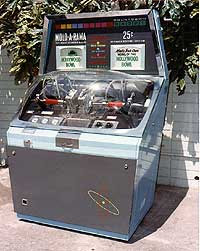 The machine says 25 cents, as they were back in the day. The machine at MSI looks just the same. The only advance in design and technology is in its ability to accept dollar bills and charge $1.50.

The Cool Stuff: The Coal Mine Tour, The Poop Happens Show, that thing with the big globe in the center of the room, The Smart Home Tour, The U-Boat Tour.

The Not-So-Cool Stuff: A section devoted to the farm industry that promoted factory farming - trying to make it seem quaint - and GMO's to children, overpriced and lame museum food, the crappy dinosaur movie at the Omnimax (I dozed off a few times) - come on folks, if you can't do CGI well, then why throw it up on a giant five-story screen.

Still, we had a great time. Gabe Garza is a good friend of mine who works there and, if you get the chance, seek him out for the U-Boat Tour. The man really throws himself into it and makes you feel like none of you may come out the boat alive - in a good way, not a psycho wielding a knife way.

We topped off the day by heading to Argyle Street and hitting Tank Noodles. My poor sheltered brother had never experienced such a place and is dying to go back. Tank rocks.

Got an e-mail from Steve Delahoyde, the co-director and main man behind the project. The Breeders have put it up on their website in its fully intended glory. You have the ability to toggle between four different perspectives of the video. Pretty cool.

"In order to raise awareness of HIV prevention in India, the charity organization BBC Word Service Trust recently introduced what?"

12% said "people dressed as condoms passing out condoms"
- Walking down an overcrowded, dirty street in India, that's the only way I'd dress.

No one bought "free condoms with Happy Meals"
- Seemed like a good idea to me. A gentle reminder to the parents what could have been.

44% got it right with "condom ringtones"

According to the AFP, a cellphone ringtone that chants "condom, condom!" has been launched in India to promote safe sex and tackle the growing HIV/AIDS epidemic.

The "condom a cappella" has been designed to break down Indians' reluctance to discuss condom use and to make wearing a condom more acceptable.

Probably not something you want to have go off on a first date. Or have your girlfriend find out that you have her sister's number assigned to it.

The ringtone itself is pretty funny, as it is intended to be. You can hear it HERE.

Email ThisBlogThis!Share to TwitterShare to FacebookShare to Pinterest
Labels: personal

joe, i had an idea maybe its a bullshit idea but here it goes, why not have don do a guest blooger spot and tell of his thoughts on his stay with you and of chicago, i know hes a fart smell, i mean smart feller, well that was it if it hits the wall like dogshit so be it

Thanks for sharing the CONDOM ring tone. Can't wait to hear it in the "real world," perhaps going off in church (I was at a funeral two weekends ago where someone's cell phone went off at a particularly inappropriate moment) or in a theater during a performance. Oh the embarrassment!

Seriously though, what it needs is a cute animated video to accompany it -- it would make a great PSA, or maybe a nice cartoon on COMEDY CENTRAL.

Just the thought of it makes me want to blow up a couple, decorate them with adorable little faces and stuff, and put on a condom puppet show. Wouldn't that be great?

P.S. -- I enjoyed "Walk It Off," too. Reminds me a bit of Alan Ayckbourn's play "The Norman Conquests," but with rock 'n roll.

You guys need to head some morning over to Lou's for breakfast before he comes home.
www.loumitchellsrestaurant.com/

Oh, hell you already did!!
DAS

Joe I just watched "perspective 1" of Walk it off and LOVED it...really well done. You did a fantastic job. I can't wait to go back and see the other three perspectives. The Breeders..very cool...I guess this makes you an honorary hipster!

"Honorary" hipster, indeed. I wrote the book on hip. And I am too hip to publish it!