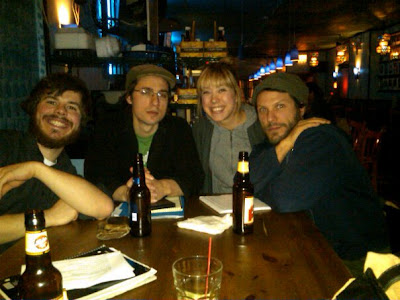 Last night marked my first meeting with a director and a cast to discuss the play I'm going to write for them for "50 Plays." John Pierson assembled Eric Roth, Clifton Frei, Erin Orr, Paige Saliba and Matt Hope.

"50 Plays" will be this year's "365 Sketches." 50 ten-minute plays I write or have written will be performed at Strawdog Theater this June produced by Don Hall. The majority of them will be customized for a cast assembled by the director. Instead of 26 directors and 26 shows performed over 11 consecutive nights, we'll be doing two Thursday-Sunday weekends, each show featuring 5-6 ten-minute plays. More directors and more actors, more community building, which was the most fun aspect of last year's project.

I was nervous. Before leaving for the meeting, I carefully put my materials in my backpack, including the hoodie John Pierson accidentally left behind at Sketchfest. Made it all the way to the door of Konak's before realizing I forgot to bring it. Great. The writer shows up without anything to write on. At 8:25pm on a Sunday in Andersonville, I went scrambling to find a notebook. I found one at a liquor store that also attempted to be a modest convenience store. A two-dollar spiral notebook, later, I was back at Konak's.

I won't get into to too much detail about what we discussed. Mainly, I wanted to find out what roles the actors tended to play, what they'd like to play, their interests and special skills. The biggest surprise was when I asked the actors what they geeked out on - expecting to hear things like "Doctor Who" or "Star Trek" - Eric said feminist and queer theory. How cool is that? This is an amazing group John has put together. I also ask the director what they would like to do. What would they like to experiment with or what genre would they like to try? Keep in mind this is John Pierson. Expect an existential farce coming from this group.

I also forgot to get a picture of the whole group, so Paige and Matt are unfortunately lacking from the above picture. Oh, and the Alabama in the subject heading refers to my reference for the which one of the 50 plays this is. I thought it might be more memorable than numbers. Hard to get numbers to stick in my head, as I learned from 365.
Posted by Joe Janes at 6:14 AM